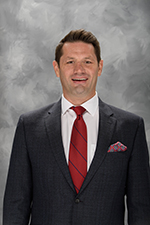 Throughout his professional hockey career, Jody Shelley was involved in his fair share of fights. But it was his ongoing battle with hard water that led him to Kinetico.

Hard water had left tell-tale signs throughout the Shelley home: Shower heads were clogged with a chalky, white residue and glasses were covered in a cloudy film. They battled soap scum in their bathtubs and their skin often felt dry and itchy after showering. After learning these were all symptoms of hard water mineral deposits, Jody began to wonder what his water was doing to things he couldn't see, such as his plumbing, pipes and hot water heater.

Kinetico performed a full evaluation of his water and family's needs, and recommended a whole-home water treatment system, which included a Premier Series Water Softener and K5 Drinking Water Station. Their water is now clear and soft, and Jody can rest assured he's providing everyone in his family -- including their dog Millie -- with healthy, great-tasting water!

If you have noticed some of the same problems with your water, take it from Jody Shelley, this is an easy battle to win! Kinetico has a wide variety of systems to meet your needs and budget. Just tell them Jody said it's time to beat hard water for good!